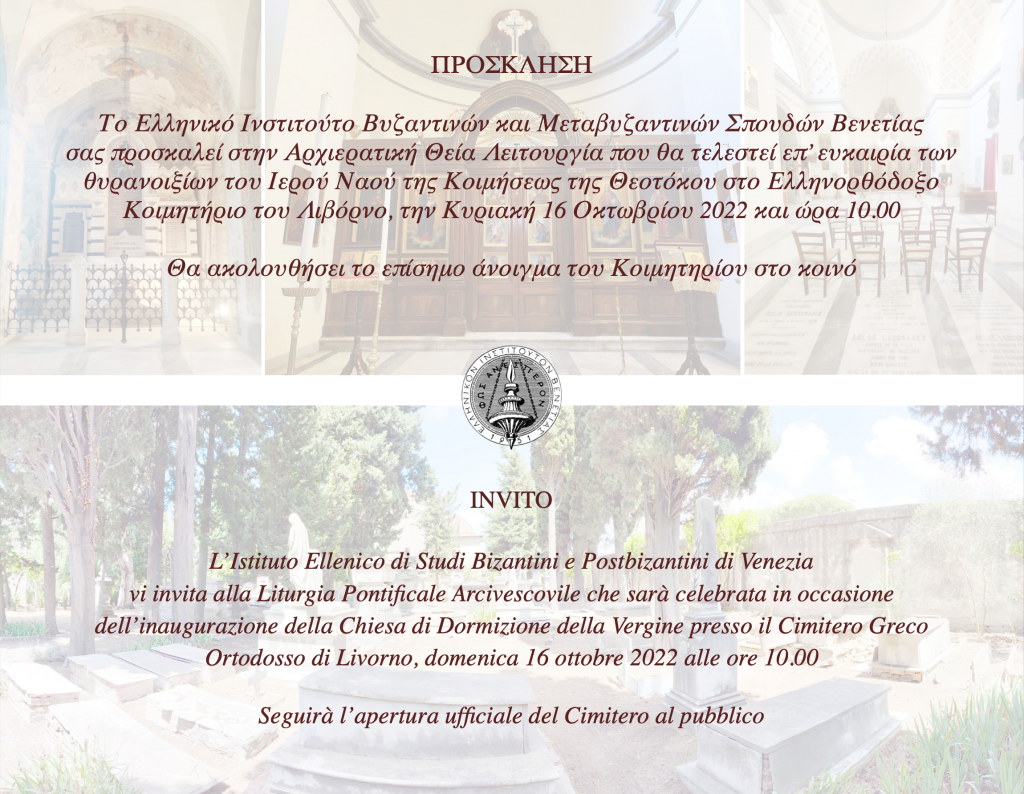 On Sunday, October 16, 2022, the openings of the Holy Church of Virgin Mary’s Assumption in Livorno were held and, at the same time, the openings of the Greek Orthodox Cemetery to the public. We note that significant personalities of the Hellenic Diaspora have been buried in the Cemetery, such as Archbishop Ignatios of Hungarian Wallachia, the writer Angelica Palli, as well as members of the prominent Greek families of Rodokanaki, Bodosaki, Mavrokordatou, Chatzidiakou, etc. The Hellenic Institute of Byzantine and Post-Byzantine Studies in Venice, owner of the Livorno monumental complex, carried out a series of conservation work and relevant interventions to make the monumental complex accessible to the public.

A special mass was held in the morning officiated by His Eminence Policarpos the Metropolitan of Italy, joined by Ioannis Chrysoulakis, the Secretary General for Greeks Abroad and Public Diplomacy of the Ministry of Foreign Affairs; Eleni Souranì, Ambassador of Greece in Rome; Elena Konstantos, Honorary Consul of Greece in Livorno; the Mayor of Livorno Luca Salvetti, Vassileios Koukousas, President of the Hellenic Institute of Byzantine and Post-Byzantine Studies of Venice and Dimitrios Zafeiropoulos, President of the Greek Orthodox Community of Venice. A multitude attented the event as well as representatives of the Region and the Local Authorities.

Afterwards, the Ambassador of Greece and the President of the Hellenic Institute extending their special greetings. Architect Chimenti presented the conservation work that was conducted regarding the ecclesiastical monument while the the Secretary General for Greeks Abroad delivered the keynote speech.