The Hellenic Institute of Byzantine and Post-Byzantine Studies in Venice is the only Greek research institute abroad.

It was founded in 1951 in the framework of an educational agreement between Greece and Italy, which allowed the establishment of a scientific institute in Venice and the reopening of two Italian institutions in Athens, the School of Archeology and the Italian Institute, which had been closed during the Second World War. In 1953 the Institute “inherited” all the real estate and movable property of the Greek Orthodox Community of Venice with the condition that the latter be subsidized for its maintenance and survival.

The Institute is housed in the building of the old Flanginian College, which was radically renovated and inaugurated in 1959. The purpose of the Institute is primarily to study Byzantine and post-Byzantine history as well as the history of the Venetian-occupied Greek areas.

The fulfillment of its goals is achieved by organizing international conferences and scientific meetings, by publishing scientific books and by the annual circulation of the scientific journal “Thesaurismata” ; furthermore, by collaborating with scientific institutes in Greece and abroad, as well as awarding doctoral and postdoctoral scholarships to researchers from Greece to pursue their research in the archives and libraries of Venice.

The Church of Saint George of the Greeks

The construction of the church of Saint George of the Greeks began in 1536, on a plot of land bought a few years earlier by the Greeks of Venice; it was completed in 1577. The works were supervised by the architects Sante Lombardo and Zuanantonio Chiona, while for the construction of the part of the temple reserved for women the famous architect Andrea Palladio was called. The church was decorated with icons brought by refugees from Constantinople, such as the Grand Duchess Anna Palaiologina Notara, but also from other areas, with works by important painters, such as Michael Damaskinos, Emmanuel Tzanes Bounialis, Thomas Bathas. The illustration of the dome was assigned to John the Cypriot, who worked under the supervision of the remarkable Venetian painter Jacopo Tintoretto.

The instructions on how to decorate were clear: everything had to be done according to the maniera greca, that is the Greek style. The pulpit in its current form reflects the work of Giovanni Grapiglia (1597). The mosaics of the Supplication on the facade of the church were made in 1564-1574 while those of the Sanctuary were made during the period 1598-1602, with drawings by Thomas Bathas, Ioannis Vlastos and Antonio Vasilakis. The mosaic of the Metamorphosis was made in 1664-1666, while the mosaic of the Descent to Hades in 1886. 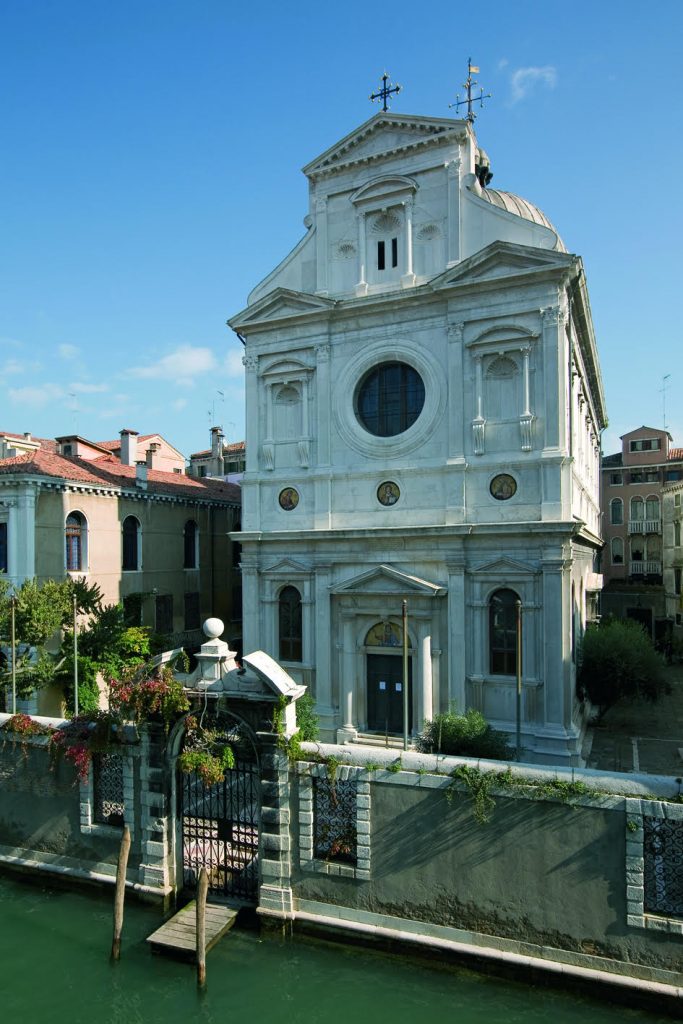 It was built during the period 1587-1592 under the supervision of the architect Bernardo Ongarin. In 1589 the clock mechanism was installed. Its construction was financed entirely by the legacy of Iakovos Samariaris from Zakynthos. The building of the bell tower started inclining during its construction. Together with that of Santo Stefano, the bell tower of Saint George of the Greeks is the unique two sloping bell towers of Venice. At the beginning of the 17th century, cells were built at the base of the bell tower that were used as a residence for the priests of the temple.

Extensive renovation works were carried out during the period 1999-2006 under the funding of the Alexandros S. Onassis Public Benefit Foundation and the Anastasios G. Leventis Foundation. 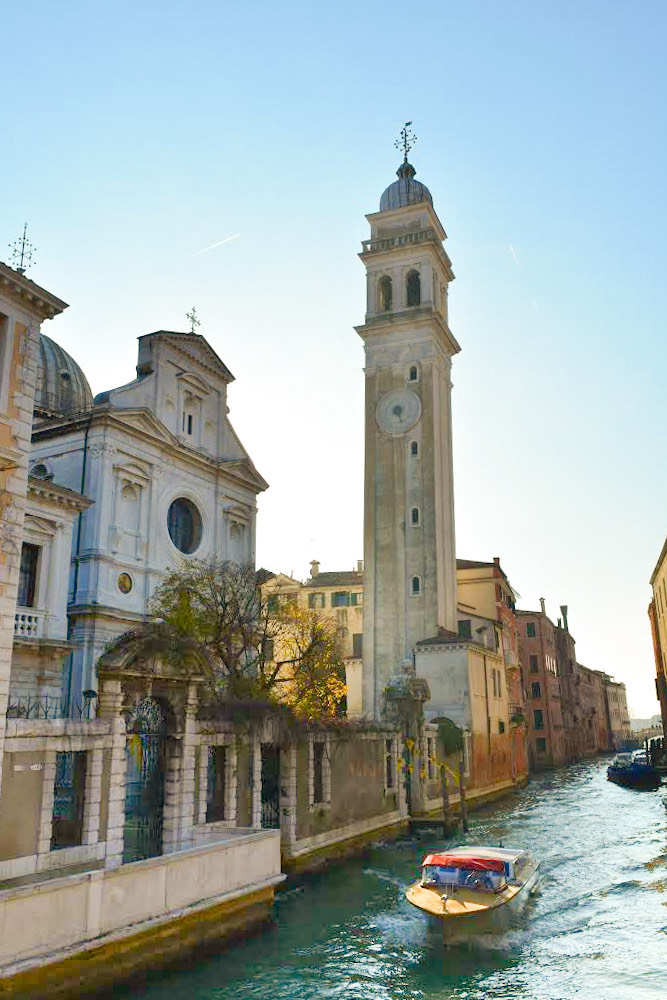 According to his testament in 1644, Thomas Flangini, a wealthy lawyer and merchant in Venice, originally from Corfu, had decided to donate a significant part of his property in order to establish a higher educational institution for Greek students. The Flanginian College, as it was named, opened in 1665; it was housed in a fraternity’s privately owned building, built with funds from the Flanginian legacy, under the direction of the famous Venetian architect Baldassare Longhena. It is in the so-called Campo dei Greci, next to the Scoletta, where the Administrative Board and the hospital of the Confraternity were housed and near to the church of Saint George of the Greeks.

Among the teachers of the Flanginian College we trace important Greek scholars, such as Theofilos Korydaleas, Pachomios Doxaras, Mitrophanis Kritopoulos and Meletios Typaldos. According to the regulation, the students had to be Orthodox of Greek origin, preferably Cypriots or Corfiots, aged twelve to sixteen, who would study for six years. Twelve of them would be interns, while the rest would be external students. The courses included “humanities”, rhetoric, philosophy and logic, theology, mathematics, and geography. After graduation, the Greek students could continue their studies at the University of Padua.

The school operated for about a century and a half and was attended by about six hundred students, many of whom later worked as teachers in schools in Greece. The students of the Flanginian College, influenced by the spirit of Humanism of the time, had founded a philological association called “Academy of the Ιnnocuous” and in collaboration with their teachers proceeded to publish two collections of poetry. In 1797, with the arrival of Napoleon, the funds of Flaνginis’s legacy, which were deposited in the Venetian bank (Zecca) were confiscated by the French and the school was led to decline. It reopened in 1824 under the name “Flangini Greek School”, to close permanently in 1905. 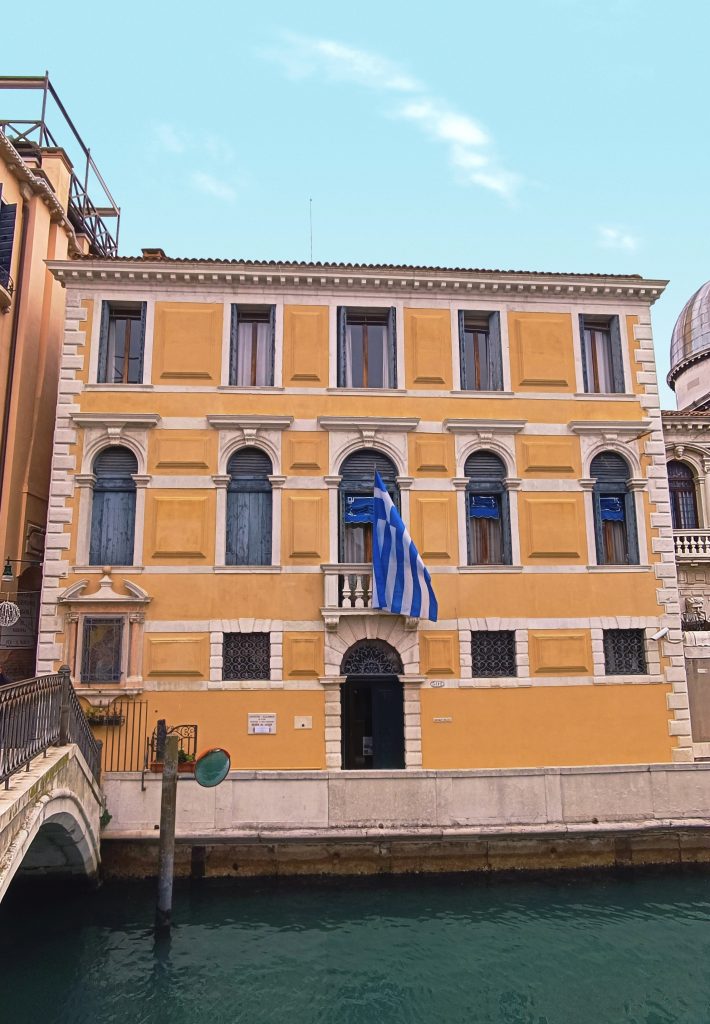 Two-storey building on the Campo dei Greci, next to the church of San Giorgio called Scoletta di San Nicolò. It is the work of the famous Venetian architect Baldassare Longhena, late 17th century. On the first floor of the Confraternity headquarters was the Hospital of the Poor Greeks, which operated from 1678 until the beginning of the twentieth century. Subsequently, this space was transformed into a one-of-a-kind museum of Byzantine and post-Byzantine icons, inaugurated in 1959 and radically renovated in 1999.
On the second floor is the Sala del Capitolo, the meeting room of the Brotherhood of the Greeks, now used for events and conferences of the Hellenic Institute. 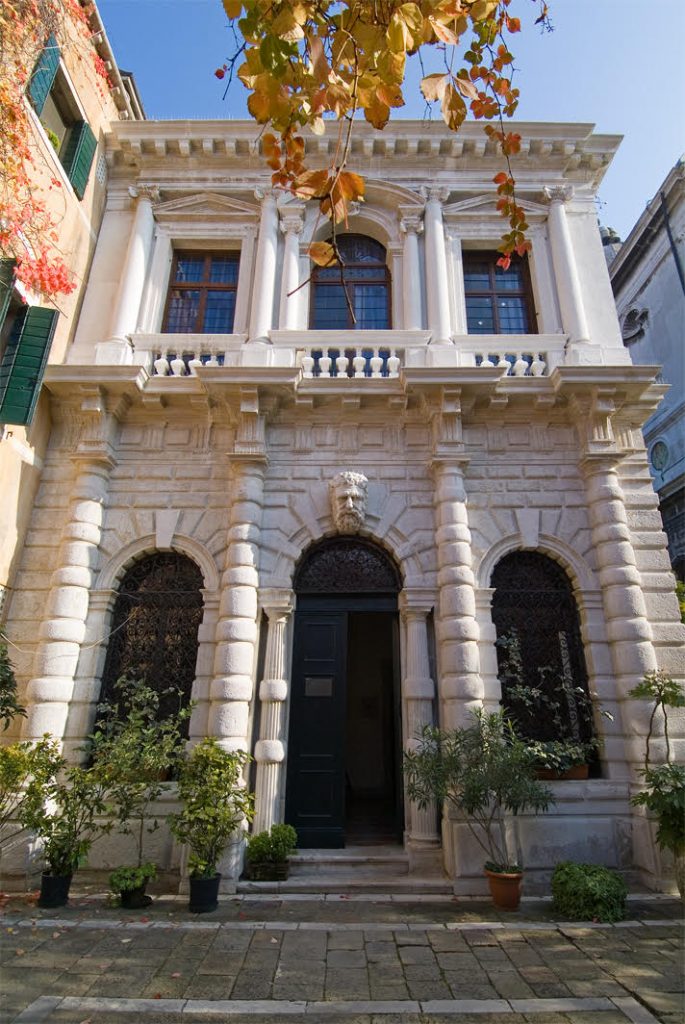 History of the Orthodox Community

The Greek presence in Venice can be traced back to the period when the region was still a Byzantine province. Merchants and craftsmen as well as artists visited the city of canals, mainly for professional reasons. They were conducting business and chose to settle there. They also left their mark on the artistic production of the city.

After the fourth Crusade, the flow of immigrants and refugees increased and peaked in the centuries that followed and especially after the Venetian-Turkish wars.

Most Greek refugees arrived in Venice after the Fall of Constantinople in 1453. People from all walks of life, either alone or with their families, sought refuge in Venice because of the perceived closeness, famously expressed by Cardinal Bessarion from Trebizond that “Venice is almost another Byzantium”. Their number was such that according to some reports – albeit with some exaggeration – it reached four thousand individuals in 1479.